Yesterday, Emily mentioned briefly the science behind seeing, with light entering the eye and the cones.  I didn’t get a chance to comment, but I had wanted to bring up how some communication scholars are working with cognitive scientific approaches to perception and visual engagement.  I have a short section in my thesis that addresses the difference between seeing and perceiving, and thus I’m going to copy and paste some of the ideas.  Ann Marie Barry proposes a theory of perception that suggests perception is first an affect and then a mental thought.  She remarks that “perception theory” is linked to “the primacy of emotions in processing all communication, and particularly targets visual communication as paralleling perceptual process dependent on primary emotion-based systems of response” (45).  Barry challenges the assumption that immediate visual experience includes any mental conception, and as a Communications scholar she turns to neurology to illuminate that “sight may indeed begin with light hitting the retina, [and] vision occurs deep within the brain; . . . [but] perception, the process by which we derive meaning from what we see, is an elaborate symphony played first and foremost through the unconscious emotional system, with neural equipment evolved over millions of years” (46).  Before the conscious recognition of a visual situation, Barry breaks down the visual experience neurologically: light/visual information from the environment passes through the cornea, pupil and lens and hits the receptors in the retina; next, that light/information is converted into electrical impulses; the optic nerve then communicates these impulses to the “brain’s visual thalamus and onto the visual cortex where vision actually occurs” (48).  It is in the thalamus where the electrical impulses divert into two routes: the thalamo-amygdala pathway and the cortical pathway.  The former connects to the amygdale, the emotional center of the brain; the latter connects to the cortex and begins the state of awareness.  The thalamo-amygdala route has a shorter distance than the cortical route.  Hence, by the time we become aware, our emotions have already been stimulated by the visual environment, as Barry notes, “Emotional reactions are therefore faster than conscious ones, and emotional memory frames all conscious response.  The cortex also sends a second signal to the amygdale, adding conscious input to emotional reaction and emotional response to thought” (49). 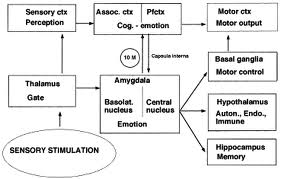 Although Barry reverts to a cognitive understanding of visual experience, she appears to express in her perception theory and definition of perception a form of affect theory.  As the emotional center of the brain gets stimulated from the visual environment, the brain and the body can act in ways a prior consciousness (Barry 49-55).  Barry defines perception as “the process by which we derive meaning through experience, is a dynamic, interactive system that utilizes built-in genetic programming to synthesize sensory input, memory, and individual needs.  The eyes are only an initial part of the equation, and can, in fact, be bypassed altogether” (48). In addition to the eye, the brain is also only one component to perception, and as James J. Gibson contends, “it is not necessary to assume that anything whatever is transmitted along the optic nerve in the activity of perception. . . . We can think of vision as a perceptual system, the brain being simply part of the system” (original emphasis 61). In other words, perceiving is neither an eye nor a brain-mind centered experience; rather perceiving is an eye-brain-mind-body affect. Perception is not simply cognitive, but embodied affects.

Emily (and AE too) expressed some of these same ideas.  In connecting this blog post to my previous, I find it interesting how Descartes addresses the mind-body problem, in which he privileges the mind over body, and how I’m addressing the brain, thinking, and a scientific understanding of experience. Possibly this may be my attraction: thinking and what happens when we experience something (as well as not experience something, but simply think).